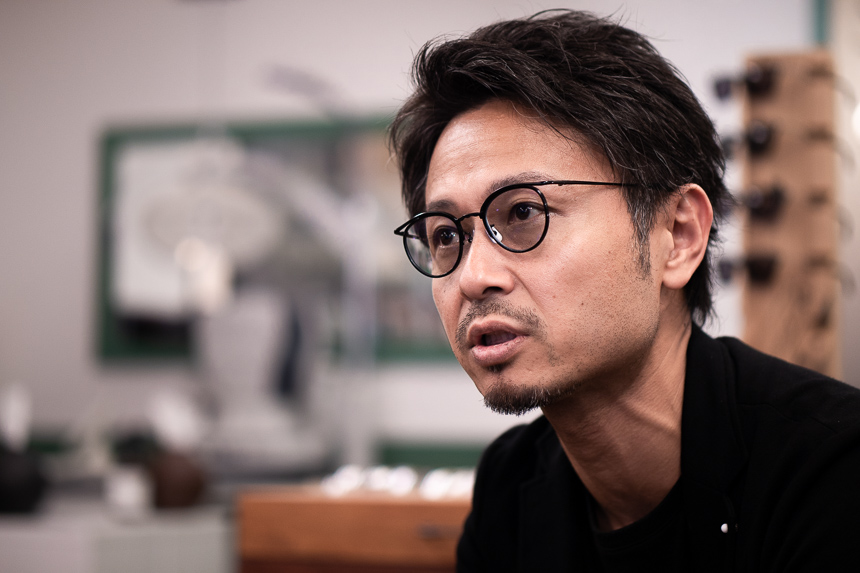 It’s the real thing, so you can have confidence, I want you to be confident. That’s the value of being born in Bibai.

National Route 12 has the longest straight road in Japan. It runs through the middle of Bibai, but if you take a side road away from it, you’ll soon see a bricked store front with row upon row of eyewear and sunglasses surrounded by antiques and miscellany.
You might just feel a little overwhelmed by all the rows of top-name eyewear, foreign and domestic, visible through the store window, all backlit and in order. But step inside and when the smile and “Welcome” greets you, this will all melt away as the relaxing atmosphere surrounds you.
“A feeling of love welled up once I first touched some eyeglasses, something I could never understand just by looking at all the curves and edges.” So states one Mr. Kurachi, a sommelier of eyewear, the well-qualified representative of the store “Three ‘I’s for Eyeglasses.” He’s his own man since buying the store from his charismatic uncle. Now, thirty years after the store began, 15 years since he went out on his own, we listened to what Mr. Kurachi had to say about his experiences, the hardships and the rewarding encounters he’s had, and also about the future of “Three ‘I’s for Eyeglasses”. 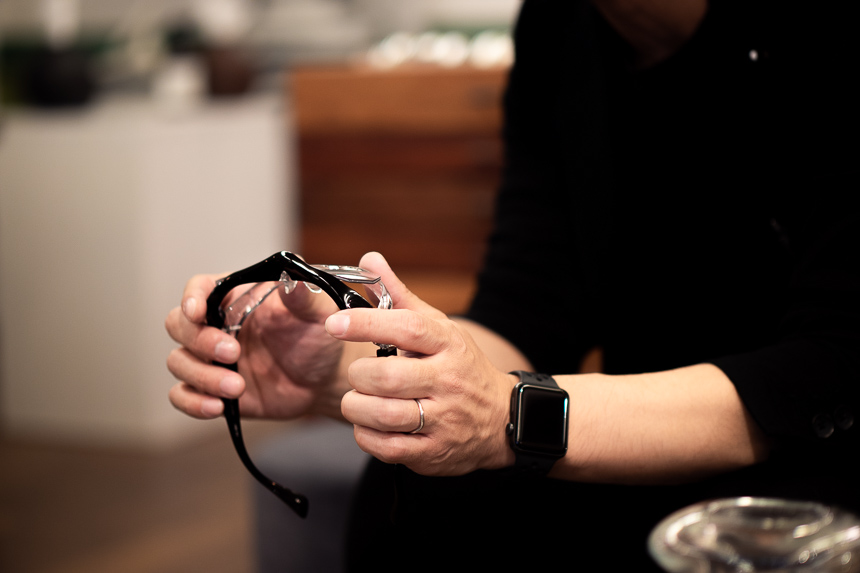 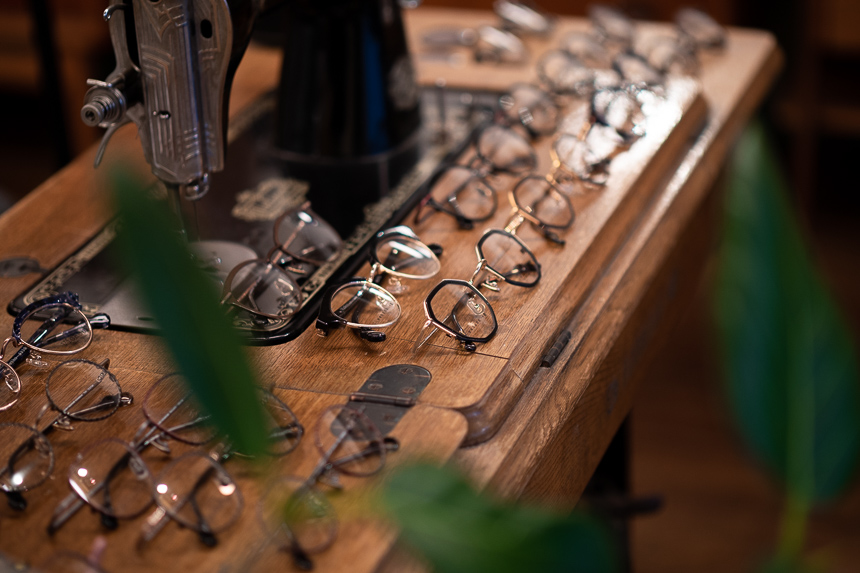 My uncle left me a huge platform. And I could apply myself because of the minor setbacks.

Until 1989, Mr. Kurachi’s uncle “Sawada” had been the Megane no Aigan Bibai shopkeeper. He had raised the idea of closing here in Bibai and merging with another store, but I thought that it would be such a waste to close the Bibai shop. So I asked him to sell the store to me, and in October that year, I went independent. With the ‘I’ of your “eyes”, the ‘I’ s of “Interpersonal Interaction” and the ‘I’ (Japanese ai or “love”) I feel for my work, the name “Three Ai Eyeglasses” was born.
And so Mr. Kurachi took over the store, and that brings us to today. He tells us about the frustrations he’s felt and how these helped him right his course and believe in himself.

At the beginning of his independence, Mr. Kurachi was 28 years old, and a “wall” was blocking his way. When his uncle the charismatic shopkeeper left the store in his charge, Mr. Kurachi took it as a chance. “My uncle’s gone, so if there’s a new store space, let’s move.” Quite a few of his customers also left.
“That greenhorn thought there was something only he could do,” Mr. Kurachi looks back on his earliest times. But he took his frustrations to heart, and he tells us, “I’d show them how I’d get it all back- not just the customers but also the craftsmanship, the store’s atmosphere, and all that.”
It’s not that Mr. Kurachi’s store was starting all over from scratch. He told us how the trust and connections his uncle had built with customers was a huge foundation for him. If I could just build on it, if I could just handle things right, then the customers would come around to my way of doing things. “I have only the deepest gratitude for both my uncle and my customers.” 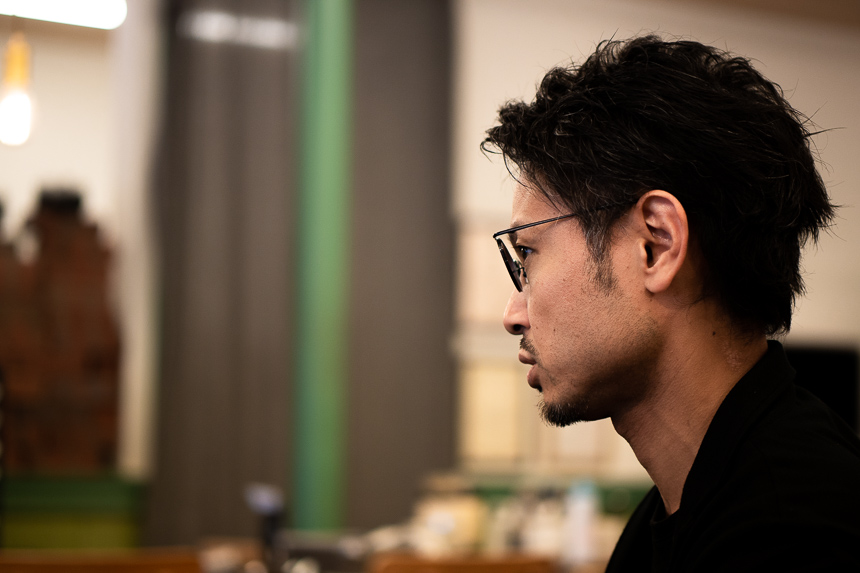 The low price wars were just heating up at about the turn of the century, and the eyewear industry was trending in the same direction. Selling cheaply, neglecting their craft and skimping on after-service… At that time, “Three Ai Eyeglasses” turned 180 degrees, selling “the real thing” as I wanted instead of cheap knock offs, providing for my customers according to the experience I’d cultivated with the love I had for my job.
Why we had to have “the real thing”? This was because not just our products but also we ourselves had to be the real thing. Glasses that worked well for you were just the start. “What you have to do as an optometrist is meticulous work. And not just what’s on the surface.” From eye exams to the final fitting, our craftsmanship is unsurpassed in other stores. And we’ll make house calls when our customers can’t come to our store because of work or other exigencies.
“People unfamiliar with eyewear or brands can believe in us. And when they meet people who know a lot about glasses, they’ll hear that surprised “Oh” when connoisseurs see our handiwork. We want our customers to hear ‘What nice eyeglasses’ from others when they’re out shopping.” How Mr. Kurachi’s fastidious character shines through his “Three Loves”! From all one hears about eyeglasses, from what customers will tell us when they visit the store yet again, “I want you to feel quite at ease when you put your trust in ‘Three Ai Eyeglasses,’” he says with a smile. 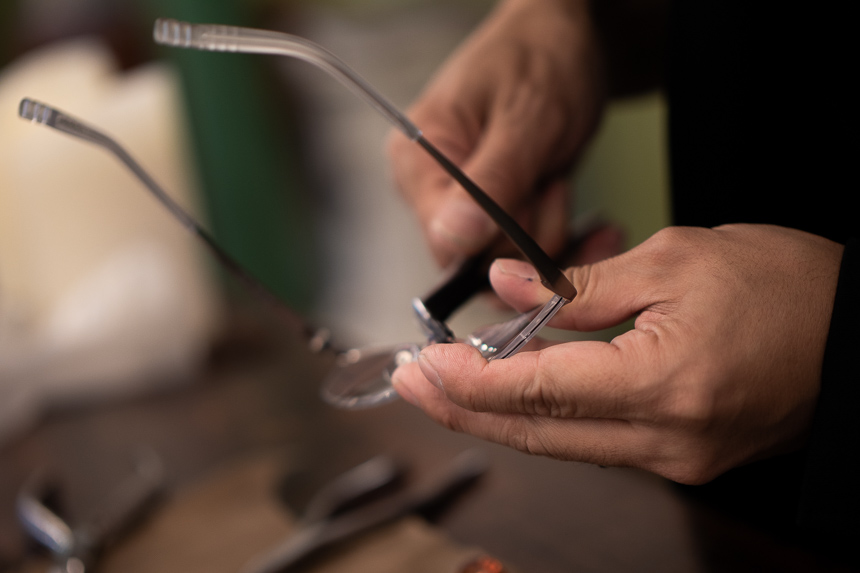 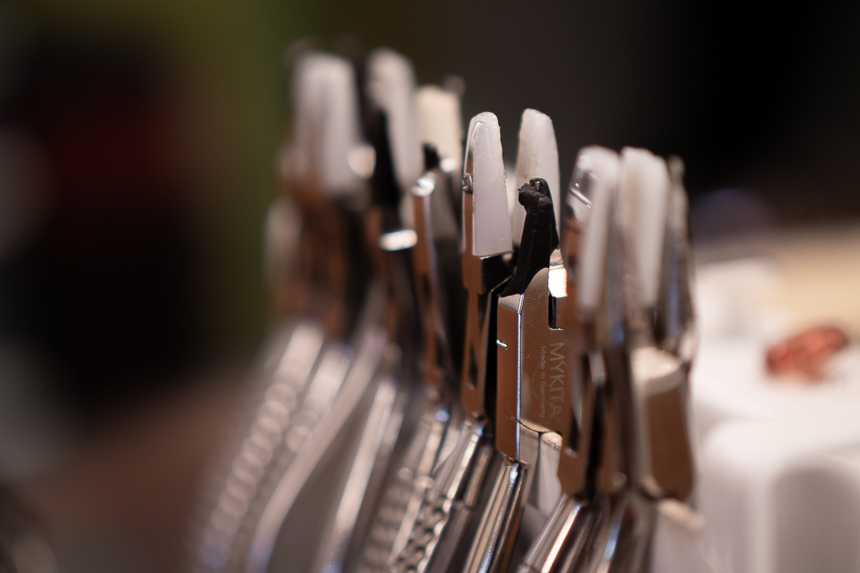 I think doing business in Bibai is my strong point.

People often say, “Why not do things more Bibai-style? Your store front for example.” If you ask people what “Bibai-style” means, they’ll tell you not to do anything too fancy, just put a total set price outside your store, nice and simple.
We all have our own tastes even when it comes to storefronts, but not being in a big city, I guess it’s only natural to want to look nice.
“My ideal, from other folks walking in the streets, I’d like to hear how everyone’s glasses look so nice in Bibai.” 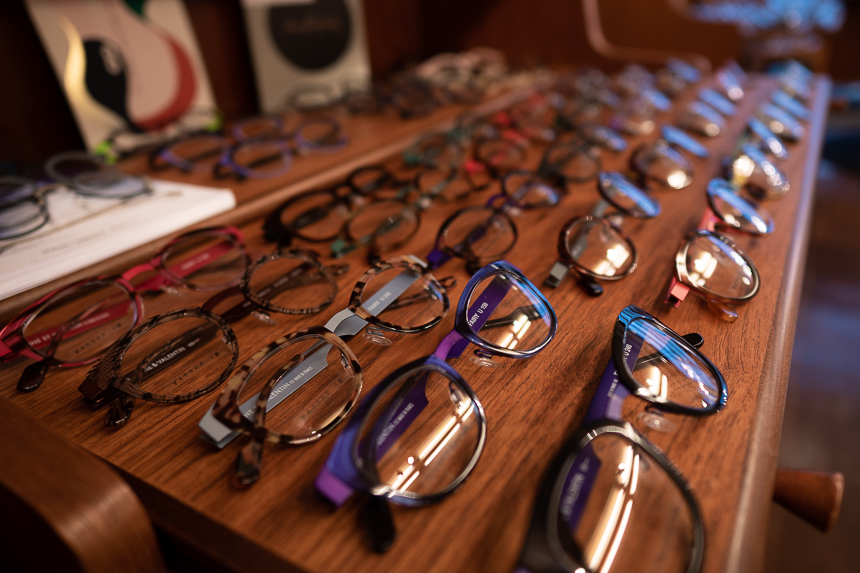 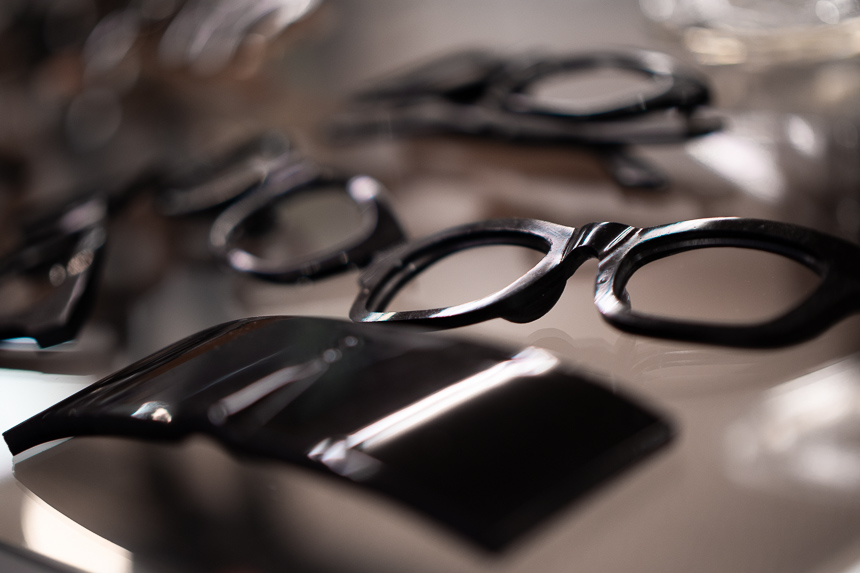 And because it’s not a large city, Bibai could be such a hot topic in Hokkaido, with the push coming from how Bibai really is handling the real thing. I mean, we could get a lot of mileage out of, “This brand’s in Bibai.”
And then, for folks visiting Bibai from far away, we could be introducing famous places and great food, and 30 minutes after they went to Arte Piazza, we could even be ordering some yakitori take-out for them

This Mr. Kurachi is active in community development, and belongs to YEG, the Bibai Chamber of Commerce and Industry Youth Division. He tells us that first, we should do things now with the people on hand who can do them, and once someone hears how something new is under way, someone else is bound to hear how “Something interesting is going on in Bibai.” It’s the people who want to try to start a new business in Bibai, the people who come into town on their days off, he says, who are the spark. “This sort of thing is all word of mouth, and I’m betting more people would come here.
It’s just in the planning stages, but we could call on technicians and hold training sessions for making eyewear. Or if we got the cooperation from an area revitalization support group, offering customers a simple cup of Taiwanese tea or something, just think of what business possibilities we could start bringing into a small town like this. I’d look forward to what we could do.”
Please do feel free to drop by Three Ai Eyeglasses. I’m sure new possibilities will come your way, too. 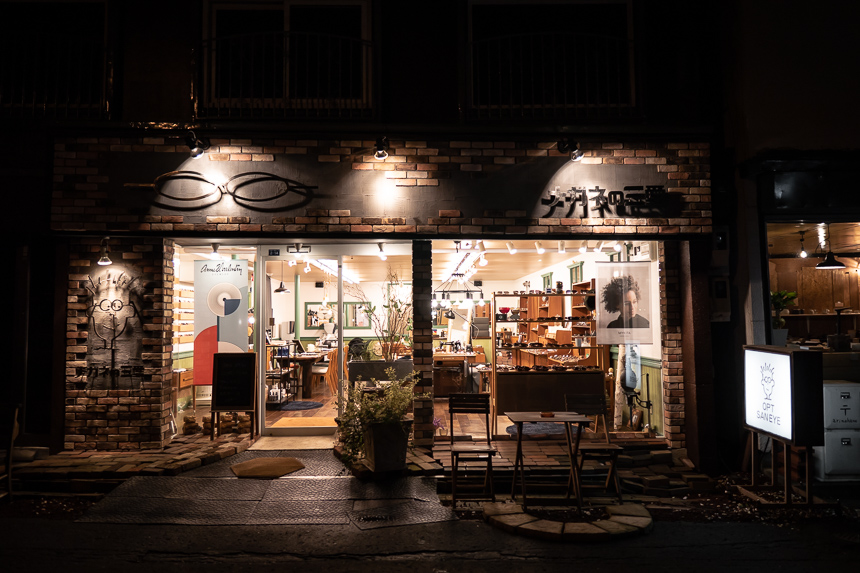 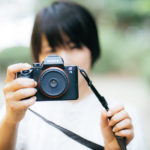